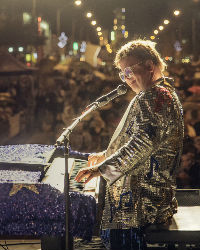 When Elton John’s guitarist, Davey Johnstone, tells you that you are the most authentic Elton John Tribute act he’s ever witnessed, you know you must be doing something right. Back by popular demand Ron Camilleri channels the music and style of Elton to where you’ll swear you’re seeing the real thing. The show includes the Elton Rohn Band – a full seven piece band. Every note is played live, no tracks and there is full four part harmony.Selling out venues across North America the Huntsville show is sure to include all the hits, from Goodbye Yellow Brick Road, to Candle in the Wind and Crocodile Rock. "I never thought I would find myself enjoying a tribute band … until I caught a set by Elton Rohn" David Farrell, The Record, Canadian Music Journalist

"I film hundreds of bands. This is without question, simply the best tribute act I have come across" Scott McWhinnie, Videographer