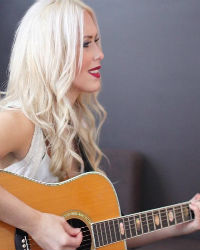 I & I with Alexis Taylor

Alexis Taylor is a Canadian singer and songwriter who was born and raised in the small town of Huntsville, Ontario. From a young age she showed a great interest in music, displaying proficiency in guitar, vocals, and strong capabilities in the area of songwriting.

At the age of 12, she wrote her first song and learned how to play guitar shortly after. Throughout her highschool years she performed in many local venues including the Huntsville Algonquin Theatre, The Gravenhurst Opera House, Hidden Valley Resort, and Deerhurst Resort. She competed as a finalist in Muskoka Star Quest and was a part of the first annual Muskoka Song Night. By then, music had become an inseparable part of Alexis' life.

After highschool, she continued to build upon her musical skills through studies at Berklee College of Music and performed at various venues and radio stations throughout North America. It was during a visit to Nashville, Tennessee in 2012 that Alexis fell in love with the city and decided to pursue music full time.

Summer 2016 saw the launch of Alexis' international career with a tour throughout Scandinavia opening for renowned singer/songwriter Doug Seegers. "Being able to open for someone as talented and genuine as Doug Seegers along with his incredibly gifted band has been an experience of a lifetime," she says. "The opportunity truly allowed me to grow as a performer, and I am so grateful that Doug took me under his wing."

Currently making frequent trips to Nashville, Tennessee, Alexis is continuing to follow her dream of becoming a musician; performing at a variety of venues in North America, and working on new music she hopes to share in the near future.