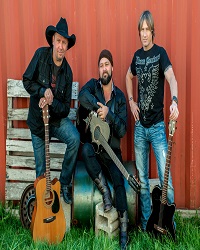 × The Country Legends Tribute Tour is firmly established as North Americas number 1 Country Music Tribute show featuring the music of the biggest names on the American scene, Garth Brooks, Keith Urban and The Zac Brown Band. The show includes sets that pay tribute to each of these great artists leading to a grand finale with all three artists on stage.

With 14 #1 songs, 28 Top 5 hits, a high-energy live show and countless accolades Keith Urban is one of the top entertainers today. Michael Thomson is Considered to be the most look and sound alike tributes in the world.

Country singer Garth Brooks has sold more than 100 million albums during his career. His music successfully crossed over onto the Billboard pop charts. The live energy of this show is portrayed by award winning Les Smith who has travelled internationally for 20 years captivating audiences with his talent to impersonate such a country legend.

Zac Brown is a country singer, songwriter, and bandleader, one of the brightest stars in a generation of performers set on changing the paradigm of the country music business. Elton Lammie has mastered the art of entertaining audiences all over the world with his stage presence and voice, bearing an uncanny resemblance to Zac Brown.

You’ll know all the songs and be singing along all night so don’t miss out, get your tickets today!