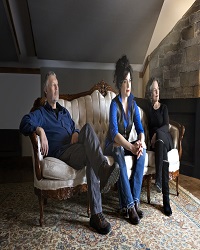 Christina Hutt can fill a room with her rich, resonant, out-of-this era voice and move you with her honest, charismatic delivery. Once described as a full-bodied glass of red wine, her sound is reminiscent of the soul-stirring vocals you would have heard flowing from a transistor radio in the late 50’s. You will understand why Hutt has been dubbed “the voice” in her hometown of Muskoka, Ontario. She welcomes you into the secrets of her heart with fierce passion and endearing spirit. Christina’s ease in a diversity of genres brings a captivating quality to her performances. The lyrics in her song “Cracks & Crevices” take you deep into the chilling darkness of emotional anguish while her tune “Fifteen Shades” makes you feel like you just might just be at a Patsy Cline Tribute Show.

Jeff Bird is a 40+ year veteran of the Canadian and International music scenes. He is a multi-instrumentalist, composer, arranger and music producer. Jeff is a founding father of the renowned folk group TAMARACK.

Jeff has realized 17 recordings of solo and collaborative work. His latest is “Felix Anima”; contemporary interpretations of the music of 12th century mystic Hildegard von Bingen performed on the harmonica and other instruments.

As an award-winning experimental film maker, his work has been showcased from Dawson City, Yukon, to Paris, France.

Sue’s latest release, Tonight We Sail (2021), is a marvellous collaboration with The Potion Kings, Jeff Bird, Kevin Breit, Randall Coryell and Howie Southwood, with whom she takes deep dives into the worlds of rock, jazz, blues and more, coming up with a brand new take on nine of her songs plus tunes by Tom Petty and Robbie Roberstson.

We're sorry, the ticket(s) you wanted to I & I - Christina Hutt with Jeff Bird & Sue Smith for the performance on Friday, October 14, 2022 at 7:30 PM EDT have just sold out or the event is no longer available for sale via the internet if the curtain time is nearing.