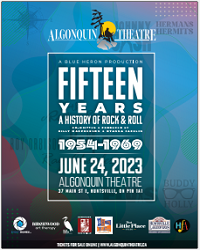 “XV Years “A Story of Rock ‘n Roll” is a rockumentary – an interactive musical journey with a script. Billy MacPherson is a musician and an avid historian. After a serious health challenge confronted him, he began reflecting upon his teenage years during the 1960’s. It was from this that his creative effort began to formulate the concept of telling the story of Disc Jockeys, Radio and the wonderful music that constantly reminds him of that exciting part of his life.

“ We used to pull over to a phone booth on a Friday night while cruising the streets, put in a dime and phone in to “ The White Knight “ on CKBB 950 AM to make a song request or a dedication. We grew up listening to DJ’s play the music we loved. This is that Story .” It is called: FIFTEEN YEARS ( XV/1954-1969)