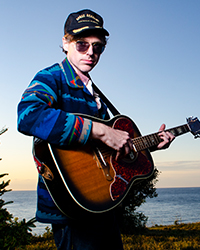 Sponsored by The Jerrett Family

2018 East Coast Music Award winner as Songwriter of the Year, Joel Plaskett has stacks of other awards and nominations from the Junos, Canadian Folk Awards, the Polaris Award, CBC and the East Coast Music Awards. From Dartmouth, Nova Scotia, Joel has sold out clubs and concert halls from one side of the country to the other.

From rocking Halifax’s Marquee Club to performing for the masses at Massey Hall or touring the country with his father, Joel Plaskett has forged a reputation as one of Canada’s most engaging performers and respected singer-songwriters. Plaskett’s songs are a perennial part of the national playlist, a fixture on “best of” lists, and the soundtrack to the lives of faithful fans across the country and around the world. His accolades over a quarter century include a Juno, numerous East Coast Music, Canadian Folk and Music Nova Scotia awards, and two Polaris short list nominations. Plaskett’s new project, 44, is his most detailed musical weave yet. A sprawling box set comprised of four, 11-song albums connected visually and thematically, at its heart 44 is an imaginative rumination on trying to slow down and grow up in a rapidly accelerating world. Recorded to analog tape, Plaskett’s records reflect his attention to detail, his dedication to technique, musical history and craft, and a sincere and inimitable lyrical style that runs through his diverse and ever-expanding catalogue.