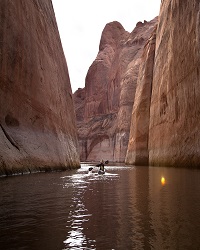 × Since 2006, the Paddling Film Festival World Tour has been showcasing the very best paddling films. The World Tour screens in more than 120 cities around the world. Join us for this year’s best paddling films. You’ll be inspired to explore rivers, lakes and oceans, push extremes, embrace the paddling lifestyle and appreciate the wild places.

The Paddling Film Festival is an international adventure film tour presenting the world’s best paddling films of the year – whitewater, sea kayaking, canoeing, SUP, action and lifestyle – in more than 120 cities and towns across Canada, United States and around the world.

Be sure to show up early at 6:30pm for a meet and greet with some special guests in Partner’s Hall. “Taste the Great Outdoors” with our good friends from Lake of Bays Brewery will also be on hand with some cold samples of their line of local craft beers.